Noah Van Sciver's The Death of Elijah Lovejoy was not only our first comic with the mighty talent, but it is also our first comic to receive a nomination for an Ignatz (for Outstanding Mini-Comic), period. 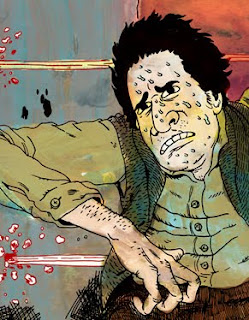 This Lovejoy mini is a perfect adjunct to Noah Van Sciver's Fanta release, The Hypo (which you really REALLY should pre-order). And while you are in Fanta's neck, stop by TCJ to see NVS' weekly diary comics unfurl on your monitor! Beautiful stuff!
Hearing about the nomination was a nice way to start the week for sure! Congrats and thanks to Noah for offering us up this guy to 2dc. Also of note, getting the comic printed by Zak Sally at La Mano was pretty sweet and fitting as well -- soo, a BIG thanks to Zak too!!
Posted by 2D Cloud at 10:00 PM