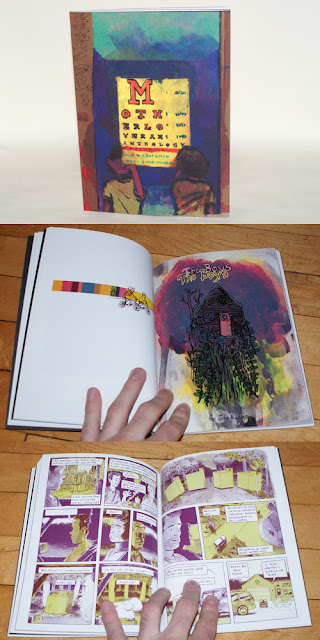 2D Cloud is proud to present Motherlover, an anthology in the vein of Drawn & Quarterly Showcase with a focus on some of our favorite Minnesota-based artists. In finer comic shops and bookstores in mid-February 2012!

“The darkness of this book’s themes should not daunt an adventurous reader, because Motherlover explores work that is both emotionally powerful and uncomfortably familiar.”

Motherlover has its roots deeply embedded in Minnesota, with the four creators involved in the book hailing from different corners of the state: Nicholas Breutzman from Rochester, brothers John & Luke Holden from Bemidji, and Raighne Hogan from Minneapolis. The stories themselves have pronounced autobiographical undercurrents, each exploring the tensions, confusion, and mis-perceptions of youth. For some, these feelings circle around sex and how it can be a source of mystery or frustration, depending on where one is in life and the world. Others encounter the loneliness and ennui that is found just as easily in both rural and urban environs. These themes help illuminate much of the push and pull in Minnesota for a lot of creative types – something that compels us to venture beyond our borders, yet that same something that draws most of us back again. While these sentiments can certainly be found throughout the work, there is plenty to be discovered that’s not restricted to any particular locality.

Nicholas Breutzman is the cartoonist behind the graphic novella Yearbooks, which came in at #24 in The Comics Journal’s top 50 comics of 2009 and was nominated for inclusion in Best American Comics 2010 by Neil Gaiman. His work has also been featured in anthologies like the Good Minnesotan series as well as Critical Citadel and more recently Pornhounds 2, with Sharon Lintz. Nic’s story You Can’t Be Here, featured in Motherlover, was also recently announced as a Best American Comics Notable for 2011.

Luke Holden, maker of zines, adventures, and art. Luke and his brother John are frequent collaborators in various creative projects, from punk/jazzy-guitar/folk music to spoken word, zines, and comics. Their work has appeared together and separately in the pages of Good Minnesotan as well as their zine series, Detrimental Information.

John Holden is a spoken-word artist and lapsed video blogger — at their height, his videos reached nearly 2 million hits on Youtube. John’s writings have been illustrated by his brother Luke and his friend Nic Breutzman in the pages of the Detrimental Information series and the Good Minnesotan anthology respectively.

Raighne Hogan is the co-publisher of 2D Cloud and colorist behind Yearbooks, Motherlover, and the covers of several 2D Cloud releases. Raighne’s past work has appeared in the Good Minnesotan anthology series, which he also acted as lead editor for during its four-issue run.

2D Cloud is a micro-press comics publisher based in Minneapolis, MN. They publish paper-craft art books, minicomics, and graphic novels by an assortment of creatives, such as Noah Van Sciver, Nic Breutzman, and Vincent ‘King Mini’ Stall, amongst others. Recent releases include Things You Carry by Vincent Stall and The Death of Elijah Lovejoy by Noah Van Sciver, hailed by The Comics Journal’s Rob Clough as “…his single strongest work to date.” and that his involvement with 2D Cloud made “…this the best looking comic of his career”. Another semi-recent 2D Cloud release, Good Minnesotan 4, placed at #2 in The Comic Journal’s Top 50 Minis of 2010

Motherlover was made possible via a kickstarter.