An ABYSS opens up over AUTOPTIC 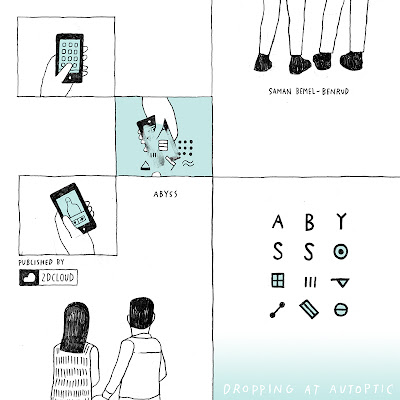 "[Abyss'] primary power lies in its presentation of these mundane markers of late capitalism into vessels of wonder and terror — abysses that can be fallen into, home to ghosts that open one’s eyes to new states of being enabled by the same device you used to pre-order your burrito." -- Sean T. Collins, Vorpalizer

Separate from that, ABYSS will be seeing the world print-side as an Autoptic debut in 2+ weeks! Since 2D Cloud is on the board (bored?) / committee for this thing (multi-day / event / medium), you can bet your bottom we'll be there. Saman will be in tow at a neighboring table -- hope to see yah there!
Posted by 2D Cloud at 4:10 PM