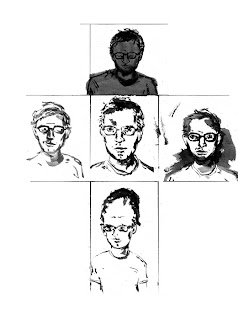 Well it's late into the night or early into the morning and I've just finished re-organizing the Itchy Keen blogsite.  There's more work to be done, but, I gotta a whole lot of other things to take care of, know what I mean?  Anywho, as the title suggests, I have also put up the first part of that Noah Van Sciver interview I've been working on.  Parts 2 & 3 come next week.

Oh, the weird illustration.  I hate prep work.  Sometimes it works to my favor, sometimes not.  These are some attempted doodle's for the interview.  It's supposed to be Noah.  Not sure that it looks like him.  I think the final one included in the interview does all right though.  They were fun to do in any case.

Here I am quoting myself, from an email to Noah 2 months back:

"Last year and early this year I re-read a bunch of the single issues of Yummy Fur, and seeing/reading Blammo definitely put me in mind of Yummy Fur. What you are doing Noah is some of my favorite comic work right now. Your push of the traditionally sized comic single and the regular out put and how quickly you are growing-- if I could I afford it I would do my damnedest to steal you and your Blammo series."

Although I cannot (yet!) steal Noah, we will be doing a number of books with him in the coming years. The first one out the gate drops late next month. The Death of Elijah Lovejoy is now available for pre-order!
Posted by raighneHOGAN at 11:54 PM