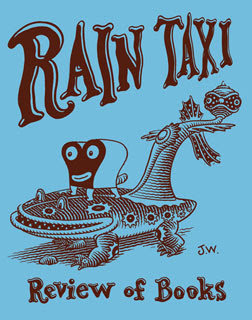 The hustling continues here at 2dc, as we have two big books at press simultaneously (Things You Carry & Motherlover), while two minis, Toby Jones & Co.'s new serial Arthur Turnkey, and Eric Schuster and Joe Gillette's Prizon Food, are being assembled for press in preparation for their MIX debuts as well!
Needless to say, our hands are full, but if all this activity wasn't enough, we have another show before all these new 2dc releases drop: Rain Taxi's Twin Cities Book Festival. Although this is a show primarily geared towards the printed word, comics always figure in the spectrum of exhibitors as well as at least one notable cartoonist from outside our borders.
The first year 2dc attended, it was Jaime Hernandez, interviewed by Zak Sally. Gabrielle Bell was the guest cartoonist the following year, which is also when Tom K. put out his first of what has become a reliable string of well-designed minis collecting much of Gabrielle's recent online output into print form. Last year saw a smattering of MN connected cartoonists, including newly 2dc-distroed artist Will Dinski, amongst others. This year, it looks like Rain Taxi has done it again by bringing Ben Katchor to the show. Admittedly, I haven't read as many of his books or collections of his weekly strips as I'd like, but what I have seen in anthologies (Kramers 7 is coming to mind) was definitely memorable and I look forward to hearing him talk this weekend.
Not to be outdone by Mr. Katchor, plenty from the stellar local scene will be in attendance, as we once again do battle with MCBA's Fallcon show for the hearts, minds, and hard earned currency of the local comics fan. If you have the chance, do stop by both, as there are plenty of worthwhile cartoonists in attendance at each show, but if you're looking for something a little different than what you may have seen at Springcon earlier this year, you may want to spend your afternoon in Minneapolis instead.
Although things are starting to look a little grim, we are still hoping beyond hope that our goal for the Motherlover Kickstarter can be met in the week and a half we have left before the curtain is lowered. We truly appreciate all of the backers that have donated thus far, and we'd like to be able to shell out those gifts we have listed, but if that goal can't be reached, well, we can't promise anything. If you haven't checked out the page in a while, it has been updated with more images of the book as well as some samples of the awesome prints Luke Holden has conjured as gifts, not to mention a limited edition of Detrimental Information 8. But enough out of me, if you like this book or what we're doing overall, feel free to share this kickstarter in any way you see fit; we want to pay the artists what they deserve for this book and we want to give people some awesome art and comics!


If you're reading this and you're out west, Raighne and Meghan will be at the Plush You! show at Schmancy in Seattle this Saturday as well. Meghan's always popular Geirdoz will be standing alongside other handmade creations of all shapes and stripes, so if you're up in the pacif northwes, make a point to stop by!
Posted by Justin Skarhus at 9:01 PM