Ha! I think the last time I used that word was when I was 12 or so and would bike to Target every day after school with my friend Thien-Mihn (I don't remember how to spell his name -- it's a mystery that I can spell my own as my spelling is indeed that atrocious. Maybe you've noticed?). We would go there purely to steal comic book cards. What put a stop to my early years of thievery was that I was hit by a car -- which at the time I was pretty sure was an act of god telling me to knock it off or something. 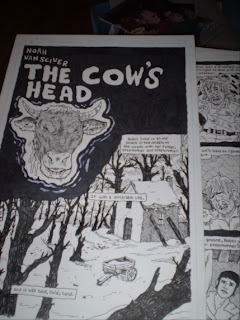 Anyways, this image was ganked from Noah Van Sciver's blog. It's a preview of a newsprint comic that he is splitting with Nic Breutzman AND that we are publishing early next year. The title of Noah's story is the The Cows Head and is based on some folklore. Noah has another preview of a short story that we are publishing next year titled The Lizard Laughs. That story is going inside a new anthology that we are starting sometime in 2012. I'll be talking more about that at a future date. To see more cool stuff that Noah is up to, like 1999 (put out by new comics publisher, Retrofit) check out his blog. 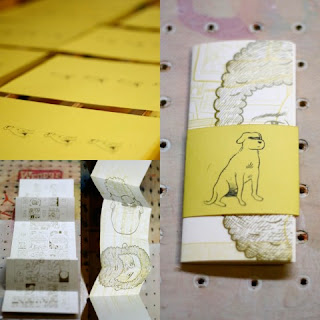 Before the month is out I will be adding a small distro section on the blog as we have a few of Will Dinski's gorgeously designed and illustrated mini's that we'll be selling direct. Speaking of which, Will just finished a new one in collaboration with Mark Ehling. The story is called The Old Guys and will be made available in two formats -- one, as a short in the literary journal, The Nashville Review, and two, as a very limited mini, which you can take a gander at above. In the interim, hit up Will's blog for details. I'm pretty sure these handsome mini's will be making it to the aforementioned distro section of the site in the near future.

Oh and before I go, Will is designing a little comic to fit squarely on our new business card. That ought to be "out" in time for Vincent Stall's Things You Carry launch this October.
Posted by 2D Cloud at 6:24 AM