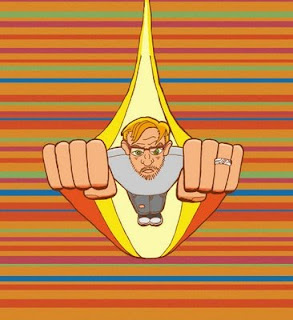 Shannon Smith, one our earliest supporters, has reappeared on our radar after a long (and we thought at one point permanent) absence to include us in his best of 2009!

In his run-down of what struck him as impressive over the past year, Good Minnesotan 3 and Yearbooks were both placed at the top of his "Non-Minicomics" portion of the list. Smith had nothing but good things to say about our third outing, putting GMN in league with the venerable Mome quarterly anthology, heady company indeed. The praise for Yearbooks was just as glowing, with a couple of choice lines like:

The color pages are so vibrant it feels like you are holding an original water color painting. I had to double check a few times to see if the page was still wet.

When we had sent off GMN3 and Yearbooks to Shannon last year, we were somewhat surprised by his silence regarding both books, given that we felt they were some of the best work we had put out thus far. Now that he has explained (or at least alluded to) the reasons for his sluggish response time to submitters, we'll give him the benefit of the doubt and simply thank him for the kind words. Thanks Shannon!
Also worth mentioning is the plug by local comics blogger Ted Anderson over at his page on examiner.com. In a small post covering the recent attention given to some of the more prominent local releases last year, specifically Rob Clough's best of list on The Comics Journal's page a while back (see our earlier post), Ted notes the inclusion of Yearbooks on the upper half of said list. Cheers Ted!
More to come as our tour season lurches back into action...
Posted by 2D Cloud at 9:07 PM