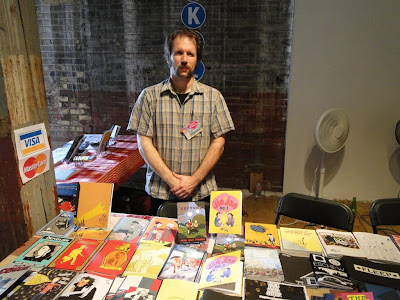 I heard the news last night and I felt like I left my body. Going to sleep early and feeling alone, even with my wife sharing the bed. This morning it hit me pretty hard. I never knew Dylan as well I would have liked -- I would see him with Tom Neely at shows, have dinner with him on a few occasions, and we’d exchange emails from time to time. But I only had this rapport with him for little more than a year or two.

I’d try to inquire as to whether he would distro some of our books, chat him up about also being a vegan, and generally come off often as a tongue-tied pest. If he found any of my blathering and blatant hero-worship the least bit obnoxious, he didn’t show it. Instead, he would tolerate my silly behavior, took me up on attending MIX, answered my questions on running a tiny comics operation, etc. In short, he was a patient, modest person who I perceived as my late 20’s role model.

Just being around Dylan put me in mind of having or being an older brother (I am the oldest amongst my siblings so I can recall being on the other end -- in addition, my younger brother’s name is in fact Dillon). Anyways, as you can imagine, the usual awkwardness and fumbling that arises from these sort of scenarios. This was my relationship with Dylan and he was fine with my interactions very much coming off like a foal’s first steps.

Dylan was also aware of this effect he had on people -- we talked a bit about it at one point and he wasn’t always sure if people were genuinely trying to befriend him or merely trying to schmooze / network with him. He may have even been politely nudging me with this. In any case, Dylan was a true, ethical, hard working dude. He dared to publish comics no else had much interest in and to continue putting out many of them in the staple-bound format as comic books. It was no mistake that Sparkplug Comic Books had ‘comic books’ in the name.

Sparkplug was and is my favorite comics publisher and Dylan is the reason for that. I am deeply indebted to him for his openness, his example, for personally introducing me to awesome cartoonists like Noah Van Sciver, and just for being an honest and decent human being. He is sorely missed.

My heart goes out to Emily, the rest of his family & friends, and the comics community at large. We lost a great hero today.
Posted by 2D Cloud at 5:49 PM