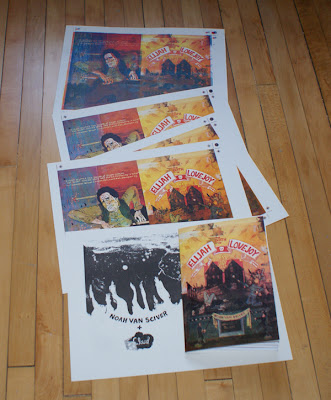 First, as seen from the picture, The Death of Elijah Lovejoy has been a little cursed over at the printer -- running into snags and complications due in part to the way I coloured and designed the cover and inside cover. The good news is that 10 or so copies have made it through unscathed and will be giving 2D Cloud a minor presence at TCAF today and Sunday via Zak Sally of La Mano 21. Should you find yourself in Toronto-Land this weekend, stop by the downtown library for comics goodness and be sure to checkout the beautiful books at La Mano 21 and Uncivilized Books! And while we're dispensing recommendations, stop by Sparkplug Comic Books and i will destroy you!

Ok, I lied about the Noah double dip, it is a Quad Powered trip into the Van Sciver world: A week or so ago our pal, Noah Van Sciver, had the latest issue of Blammo reviewed over at The Comics Journal. It was maybe a sterner review, but still a positive one. Shortly thereafter he was interviewed over at Ink Panthers. They talk about getting harsher reviews, make it or break it deals with their female counter parts, etc. It's interesting and funny stuff -- go give it a listen. If you want to take a peek at one of the stories included in Blammo # 7 (and trust me, you do), head on over to Top Shelf 2.0 for 'Who Are You, Jesus?'

And speaking of this Noah Van Sciver fella', The Death of Elijah Lovejoy is getting closer and closer to  finally being realized in print and will be premiering proper at SpringCon 2011 in exactly 2 weeks!! Noah will be on hand for the show, so stop on by then and chat him up. We will have more news on SpringCon soon.
Posted by 2D Cloud at 9:23 PM