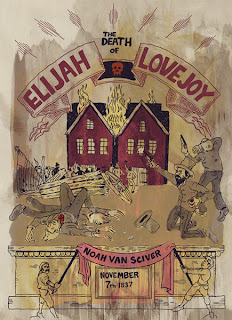 So, it's 2001, er 2011.  Happy New Year folks!  We have some big plans for 2011.  For the past 2 years we have only put one or two books out all year.  This year, we are upping that to at least 4-5 titles at minimum.  We've budgeted for considerably more, but we have to wait on the artists to finish or for some (myself included) to start their respective books with the gusto required to get them done on schedule.  In a future post I will go over some of the titles and the artists involved.  It's going to be a full year!

The first book out of the gate for 2D Cloud will be Noah Van Sciver's The Death of Elijah Lovejoy.  To the left is a very rough colour test-- I'll be doing a number of these and having Zak Sally take a look at seeing which ones would be easiest to run off his press.

I'm very excited to be working with Noah, who recently had a fling with the press via the Most Memorable Comics and Graphic Novels of 2010 on NPR.  He is also going to be on Inkstuds in the very near future and he has a comic in an upcoming issue of MOME!  Congrats Noah!

I am also very excited to be using Zak Sally's press for The Death of Elijah Lovejoy, it's a perfect fit.  In the next month or so we will have a more in-depth interview with Noah over at Itchy Keen.  And at some point here we will get that video interview we did between Zak Sally and Dylan Williams up.

Speaking of interviews on Itchy Keen, we have a new one up with Jordan Shiveley, head cat over at fellow minneapolis based small press publisher, Grimalkin.  They have title out by Noah Van Sciver at their shop.
Posted by raighneHOGAN at 8:14 AM