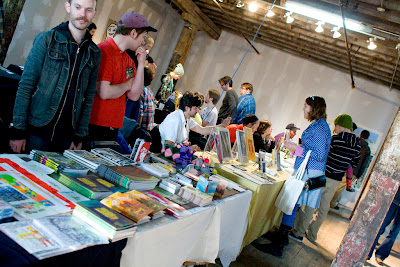 So, MIX 2011 has come and gone already. Geez that was quick. It was a pretty spectacular show for us and easily our best sales ever. All of which I am pretty pleased about as we premiered 5 books at the event (Things You Carry, Motherlover, Arthur Turnkey Vol. 1, Prizon Food Vol. 1, Pornhounds #2 self-published by Sharon Lintz) 4 of which we published ourselves. In addition, we stayed home most of this year to put away enough dosh to launch those 4 books -- only stepping outside the state for the Chicago Zine Fest where we launched the ashcan of The Death of Elijah Lovejoy by Noah Van Sciver. Above photo by Sarah Jordet.

On Saturday, we were a little flush on folks behind our tables with Ric Schuster, Noah Van Sciver, Nic Breutzman, Justin Skarhus, myself (raighne here), Meghan Hogan, and by about 2 or 3pm John & Luke Holden dropped by as well. It wasn't until around that time that sales actually picked up, as we had a slow start, same as anybody there maybe.

Enough of this, lets look at some pictures (PS -- I stole all these pics from peeps on the net, hope no one is offended. If any of it is a bother or I didn't mention you or info is wrong, write me and I'll correct it ASAP)! 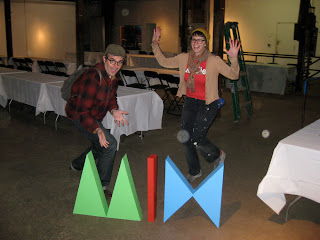 Will yah look at that -- MIX before anybody's arrived. Here is the director, Sarah Morean with Mike Haeg (the cool dude that made 'dem cool MIX letters!) doing some sort of interpretive dance to help ensure the success of the show for everyone. 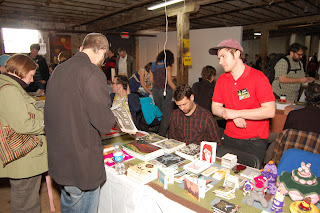 Justin, Nic, Noah -- table-manning. This must have been our Sunday set-up. Justin was there all of Sunday versus Saturday where his girlfriends sister got married just down the street from the Soap Factory. Lotta zipping around for that guy during MIX//Marriage weekend. 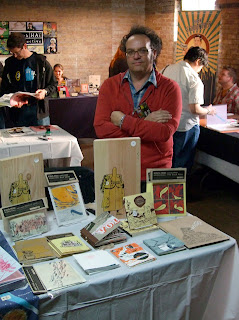 Behind us and kitty-corner, Vincent "King Mini" Stall was at his table, pimping Things You Carry, the first book we've published with him -- that comic was flying out of his hands. This fellow is a comics making and selling wizard! Now, you know you should probably add it to your collection right? It's in our shop and boy is it a beaut -- go buy it! Photo by Dustin Harbin. 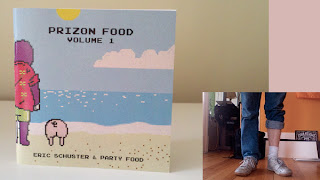 The elusive and camera shy Ric Schuster had the first volume of his and Joe Gillette's Prizon Food premiere proper at the event. It's a thick and solid mini filled with top notch bit art. I loves it! And you will too. It will be available in the shop shortly here. 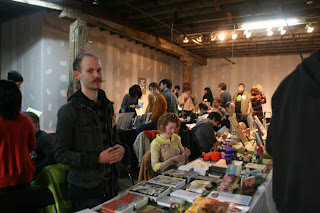 Ittsa me, mustacheio! Maggie is crocheting away, Zak, Anna and Evan in the background. 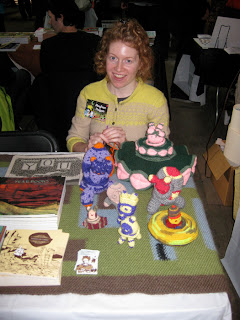 Maggie and her cute weirdo Geirdoz! Maggie and I will be doing something neat with those crocheted creations next year. Exciting! 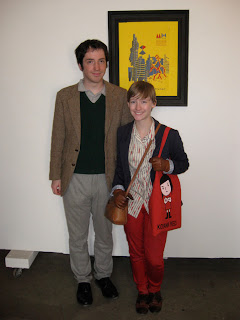 Toby and Maddie had a book premiere at the show as well, with Arthur Turnkey! We were pretty sure they were not going to make it the show proper, but they did! Surprise guests!

Also: check out that Kickass Annie bag that Maddie is sporting! Having met Annie for the first time at MIX I can see why everyone adores her -- she is simply put, one of the nicest generous, most sincere people I have met in quite some time. On top of that she puts out some gorgeous comics and books -- now go buy some of those beauties from her! 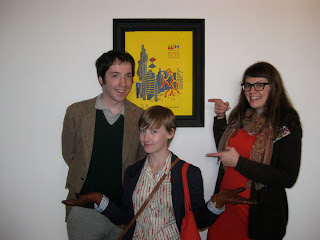 MIX director, Sarah Morean, as you can see here was also was quite thrilled to see those two adorable and talented young cartoonists! 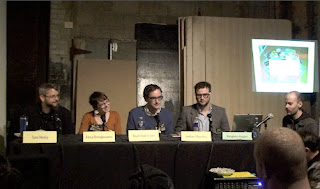 I moderated my first panel with these cool comics cats: Tom Neely, Anna Bongiovanni, Noah Van Sciver, Jordan Shiveley. The name of the panel was Anthologies Anthologies, Everywhere. I was ill prepared for my own panel. With that said, I was grateful for these cartoonist pals to participate in the panel regardless. I'll be putting my thoughts together a little better on this subject at a future date over at Itchy Keen -- that is whenever I get my butt moving on it's relaunch... Another surprise creator at MIX was our pal Will Dinski. On Saturday he dropped off some more copies of his excellent mini's for us to sell at the show and was seen at the Top Shelf table signing last year's Fingerprints. 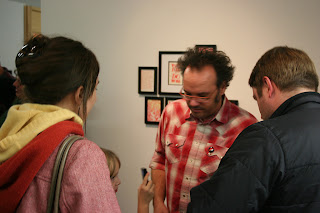 On Friday night there was 3 pre-show parties, one over at MCAD focusing on some of the Women of MIX, 2 at Pink Hobo // Puny -- one was the Cloudy Collection Exhibition curated by Vincent Stall, the other event was a Drink & Draw with food generously donated and catered Jordan Shiveley, publisher at Grimalkin. It was held in back of Pink Hobo in the Puny offices and going on pretty much concurrently as the collection itself. There is the man himself, Vincent "King Mini" Stall! Photo by Chris Pitzer of Adhouse I believe. 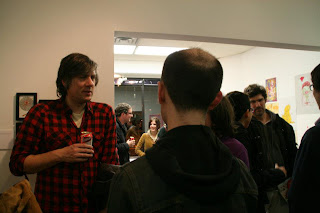 A great exhibit with great company -- here is my bald head talking up Tom K of Uncivilized Books and his cold beverage.

In the background you can make out Zak Sally of La Mano, Julia Wertz, Noah Van Sciver. And I think you can just barely make out Maggie's jacket too. 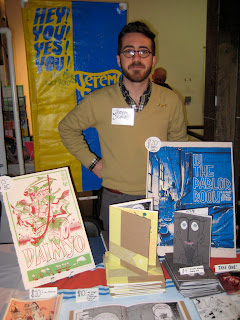 If it isn't obvious, these pictures and events are not really in chronological order. Anyways, this talented young man was brought over to our table's by the wonderful and charming Annie Koyama! Jeremy Sorese is an emerging talent and one certainly to keep an eye on in the future. If you check out his site you can read In the Parlor Room, a gorgeous 2 color comic, clocking in at over 40 pages! He also has a peek of his new upcoming work -- all very exciting stuff! 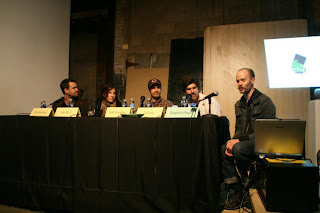 As only my second panel, this one ran a little smoother. The program was titled How Not to Succeed and had Nic Breutzman, Julia Wertz, John Porcellino, Zak Sally for panelists. My thinking for the panel was that we've all had more failures than successes -- failure is not a bad thing either. It's an opportunity to learn. And in retrospect there are usually some funny stories in there as well. A big thank you to these wonderful cartoonists for their participation! 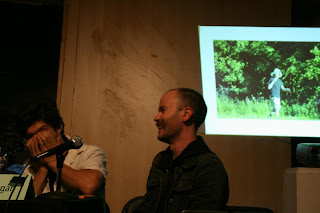 Yeah, I grabbed a bunch of strange photo's of the gang from their blogs or just online things I found for comedic effect. The talk ended with Zak telling everyone this picture of John Porcellino wearing a goofy sun hat picking raspberries was a metaphor for the future of comics -- he is so right! A bunch of these photo's are by Amaya McBatman & Caitlin Skaalrudd. 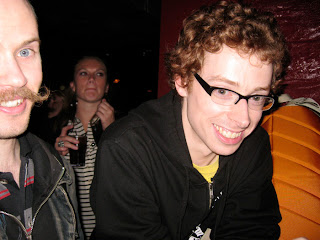 At the MIX Mixer we donated 50 copies of Yearbooks for the Comic Book Legal Defense Fund -- the first 50 people in attendance got a free copy for their 5$ donation/admission to the event. Also, MNCBA donated a tablet that was later won by Neil!

Got pretty drunnnk this night. Here is a pic of me and my pal Neil Brideau! 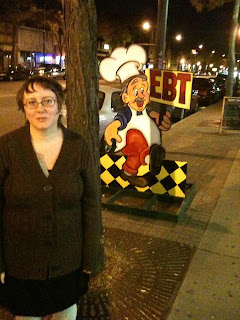 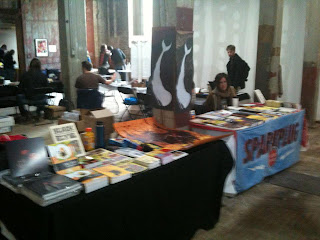 2 pics of the IWDY + Sparkplug side by side set-up! Tom Neely took this photo with Julia wertz behind the Sparkplug table. 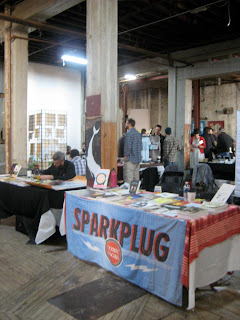 This photo by Virginia Paine if I am not mistaken. 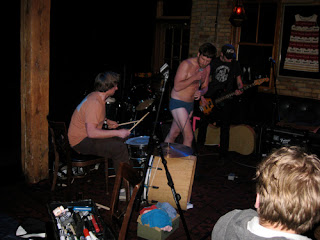 The official after party for MIX 2011 was hosted at The Red Stag. I had never been there but it turned out to be a great venue! John & Luke Holden + Garret = Cause Without A Rebel, this event easily became my favorite part of the whole weekend. Love these guys! Photo by Sarah Morean I think. 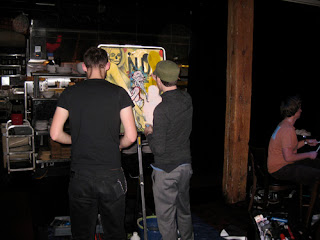 At that same awesome after party event, my Rogue Citizen pals did a live-paint throughout the two bands' sets. Great stuff! 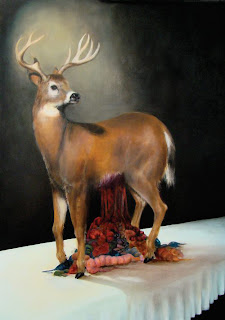 The Knotwells closed out the set -- they were short a man, but they did an admirable job filling that gap. A big thank you to these damn wonderful gents, they made the evening magical and memorable!

And another equally huge thank you to Annie Koyama of Koyama Press for her support of the arts everywhere she goes -- she has all our hearts!

There were such a large showing of out of town artists, publishers, DIY distro's at the event like Adhouse, Sparkplug and Top Shelf who returned for another year, I Will Destroy You, Microcosm, One Percent Press, Secret Acres, Spit and a Half and many many more! I spent 3 times what I thought I would allow myself -- such a wealth of drop dead gorgeous comics! GAH! A huge thank you to all them, all the awesome in town publishers, MIX2011 team//staff, the director Sarah Morean, volunteers, and of course a giant thank you to the comics loving public -- thankyou thankyou thankyou one and all! You all made it magic!