This past weekend, our 2D Cloud gang made it to the Stumptown Comics Fest in Portland Oregon. We arrived on a Friday, famished.  After dropping off our books and baggage at the Hotel we enjoyed a meal at Arabian Breeze.  Downing 2 beers a piece, the males in our group (myself being one of them, I just double checked) quickly grew weary.  By 9 pm we were on our way to slumberland.

The following morning Meghan and I awoke to run over to Voodoo Doughnuts for, wait, VEGAN DONUTS!?  NAHM NAHM NAHM!!  Justin and Sarah awoke for similar reasons I am sure.  Though their donuts were topped with bacon.  Thus, a jittery start to day 1 at the fest. 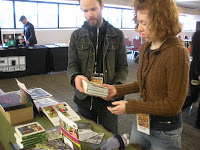 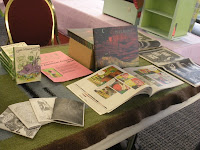 We had 4 new-ish books at the show.  In the right hand corner there, we had Nic Breutzman's newspaper biggie You Can't Be Here.  On the left, we've got the Sunday Edition of Good Minnesotan #4 (limited to 30 copies). 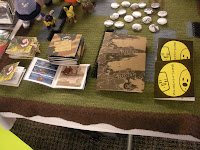 Next up, that yellow guy is Sarah Tulius' Shortrounds.  The paper bag coloured fellow is Justin's RDCDFist.  I have a short in there as well. 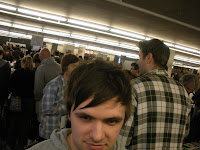 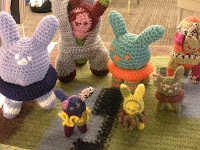 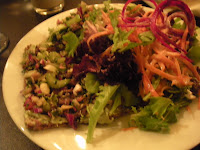 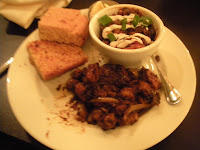 Stumptown was an amazing show, and Portland an amazing city.  This has certainly been our best show yet. GMN#4 sold out at the show, which was exciting!  To nestle our ego's back to earth, we only brought 16 books, so, maybe not a HUGE deal, it was pretty neat though.

There was a whole gaggle of awesome books that we picked up.  From the top of my head they are: Diamond Comics 2-5 edited/published Jason Levian (the fella who own Floating World Comics), Young Lions by Blaise Larmee, 2 Reporter comic books by Dylan Williams, Flesh and Bone by Julia Gfrörer (a beautiful book that I read during the early hours of the morning and in the dark so as not to wake my fellows), Paper Cutter #12 edited by Greg Means, Faces Spaces by Sean Lynch + Ed Choy Moorman, Henry & Glenn Forever by Igloo Tornado, Neely Covers Monsters to Give You The Creeps Collectors Edition by Tom Neely, uh, a bunch of other books that my mind is currently blanking on. Justin had the excellent idea of only picking up books from the small distro's and small presses (which is why we did not pick up Wilson--yet). 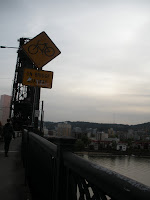 Our trip ended with a vegan dinner at the Vegetarian House, where we ate yummy vegan food stuff with the likes of Blue, Neil Brideau, Kane Lynch, Tom Neely, Dylan Williams and bunches of other cartoonist's whose names I am blanking on (not so good with names).

Let's see am I forgetting anything else... Most likely.  Did get to meet Eli Bishop of Global Hobo, missed Richard Krauss... I am probably missing more things and people's but I am tired, and me missing sleep wins out.  To bed! 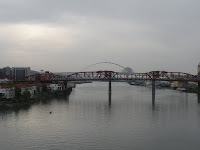 Posted by raighneHOGAN at 8:26 PM