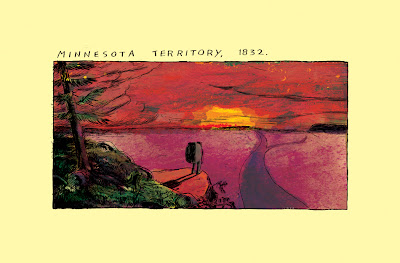 Nic Breutzman, as you may recall, has two stories in Motherlover; Photograph and You Can't be Here. The latter of which was recently selected as a Best American Comics 2011 Notable! Woohoo! He was also recently featured in Metro Magazine with an exclusive comic focusing a bit on Saint Paul! Go check it out!

That comic sorta ties into a new book that Nic has been beavering away on for the past two years or so. We will begin serializing it online early next year. More on that later. If you would like a peek, the first nine or so pages were previewed and featured on MPLS.TV a month or two back. The image at top is from said book. And if it isn't obvious, I colored 'dem pages.

Motherlover is now in the shop and Nic has some more collaborative work with Sharon Lintz via Pornhounds 2 in the shop as well. We will have more news on that soon. In the meantime, why don't you visit Pornhounds.net